Nick started with a new girlfriend last summer. He decided he wanted to go ever more steady with her until they were an inseparable item. Any part do that he had going, she would always be there. Abbey was in the background and generally mixed in with our crowd. Eventually it would become a full blown thing to the point of engagement. Nick was never one for lads night out so we decided we would take it easy on our Stag do and place him in familiar company with his two brothers and friends and set the surroundings near his home town of Coleriane. We agreed the location for a night copious beverage consumption at the seaside town of Portstewart. 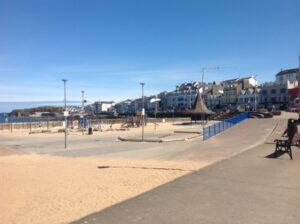 So we headed in our vehicles to reach our destination. Excited at the prospect of drinking and partying we wanted to keep the stag do in a small area on the sea front. The main seafront area in Portstewart is a stretch of town main road called the Promenade. For a stag nights in Portstewart this was ideal as all bars and nightclubs were in the none place. Our first place of watering was a popular bar in  PortStewart called the Anchor Bar. The Anchor Bar had quite a plush interior and was very well suited to our need of a fun stag night. The layout was very comfortable with upholstered panelling and neon strip lights. It felt very much like a prelude to entering the nightclub. The bar was part of a nightlife entertainment venue known as the Anchor complex. This would be a mainstay for revellers in Portstewart and certainly a must event for a stag night. 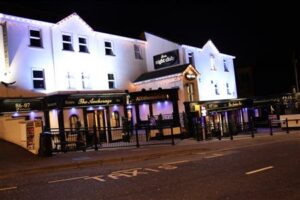 We decided we would explore our options and head for another bar. Just along the sea view known as the Promenade, not far from the Anchor bar was the Shenanigans bar. This was a more informal atmosphere where people seemed less dolled up but certainly willing for a good night. The interior was unpretentious and relaxed. Here we were able to talk and catch up on each other to get ourselves in the mood for this stag party. As this was a stag event in Portstewart, a local bar had the beer stock to fortify ourselves for the coming night. Nick was enjoying his last night of freedom with relish as at times he was in a fit of laughter as his mates where goading and pushing the humor to entertain the man. Stag nights are best held with the people who know you enough to set you off on a fun tour. 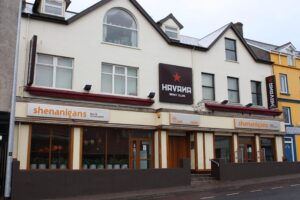 The Havana nightclub is part of the same establishment as Shenanigans bar. As it was so available and the time was encroaching on eleven O clock. We agreed the stag do would make a further venture into the nightclub scene and head into the Havana club. Here there was plenty of thumping  music and flashing lights to get our blood pumping as we horsed around on the dancefloor in alcoholic oblivion. Some of our gang decided hitting on the available talent in this place. A good excuse to meet people who are up for fun is advertising you’re on a stag night. Girls feel a little safer with a crew that are precelebratiing a marriage. Anyway the upshot was they were getting along well with their freshly acquired female company. It seems a stag party in Portstewart is an appropriate event for some who might feel lucky. So we all had a good time staying at this venue until we were informed by one of the girls that another good nightclub called the Aura was opened and for a good night at Portstewart, this nightclub was not to be neglected.

The Aura nightclub was part of the anchor complex along the promenade in Portstewart. We all piled in shelling out our money and the lads who pulled allowing the girls free entry. The place was high energy with a crowd of revellers seriously having a good time. The place seemed like a good modern nightclub with spotlighting, led lighting and all the trimmings of a continental nightclub lit up like a christmas tree. A good place for the end of a stag do as we would go out in style. The atmosphere was extremely lively as everyone on the place seemed completely focused on a good time. We continued a the stag event until the nightclub ended and it was time to go home. Portrush was definitely a good place in Northern Ireland to hold a stag do if you want everything close within walking distance without needlessly forking out money on taxis. The beachfront is also a plus as you can meet people in a place that has nice surroundings.